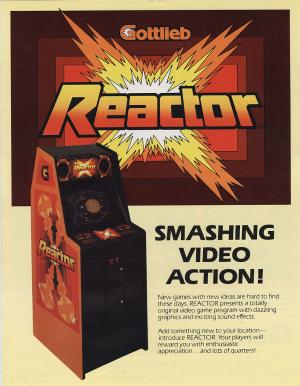 The player controls a cursor that can move freely within a screen-sized arena, the nuclear reactor. The center contains a sun-type gravitational power source, the slowly overheating reactor core. The surrounding wall or the sun, if touched results in death. The cursor is controlled with a trackball by the player, who has to roll it fast in one direction in order to overcome the momentum of gravitation imposed by the sun. Swarms of enemy objects named after various radioactive particles float around in the reactor arena, obeying simple physical laws. These enemies can freely bounce into the walls at low speeds, have a repulsive force against each other and actively attack the player cursor. Boss types often break up into several smaller particles. The object is to survive the sun and walls while gaining the highest score possible. It takes a delicate touch. Rather than moving the cursor/avatar left, right, up and down as in many arcade games, it is controlled by gravity and moves freely; with the player only being able to accelerate it rather than control its movements directly. Meanwhile the enemy particles are getting so aggressive that it can get very difficult to avoid being pulled in by the sun or touching a wall. The basic gameplay consists of accelerating the cursor just at the right times so that it circles the reactor core with enough speed to have control via its own momentum when the enemy particles try to knock it off course, and then to place decoys and actually use the acceleration of the ball itself to knock enemies into control rods, traps or the reactor core. By pressing the primary button the player cursor can go into high power mode, providing higher repulsion of enemies and conversely higher risk to the player.