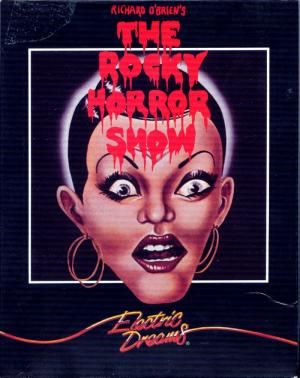 The Rocky Horror Show is an action adventure game based on the movie The Rocky Horror Picture Show rather than the stage production for which it's named after. You play as either Brad or Janet, in an attempt to find all of the pieces of the De-Medusa machine so that you can save your sweetheart and escape from the castle before it blasts off to the planet Transsexual in the galaxy of Transylvania. You move around the side-view rooms of the castle while characters like Riff-Raff, Magenta, Columbia, Eddie, and Dr. Frankenfurter make things very difficult for you by stealing your clothes, shooting you with lasers, and running you over with motorcycles. Like the musical, the game is very unusual, to say the least.