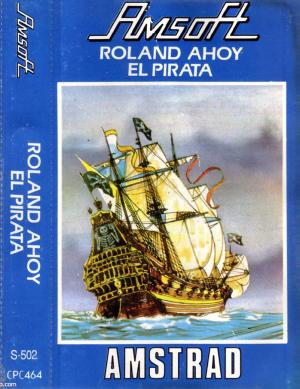 After loading, press the DEL key and the ship is now under your control, in the Map Scene. To move the ship up, down, left or right use either the AMSOFT JY1 Joystick or the cursor control keys. To move from the map !o another scene, you must dock the ship against the quays (the grey zones). Your first visit must be to Powder Quay to collect ammunition. After Roland has collected ammunition, he must move as far as possible to the left and then jump on board using both the fire button and left direction simultaneously. The map will then reappear with the ship in the appropriate position. To fire a cannon ball or to make Roland jump upwards, press the joystick button or the key marked X on the keyboard. To make Roland run left or right use the joystick or the left and right cursor control keys. After losing a life, the boom is rebuilt, but Roland retains the ammunition and treasure that is on board the ship. After treasure has been deposited at the back of the cave, or has been stolen from the harbour, Roland boards the ship automatically as he reaches it. The game then returns to the map scene and you must repeat the sequence to obtain further items of treasure. There are many items of treasure which are stolen one by one. After obtaining three of a kind a new treasure appears in the harbour. NOTE; The program prevents the moves below, so no cheating is possible! Once you have collected cannon balls, you may only use them to fire at the boom. Firing is not possible at point-blank range. You may not enter Powder Quay with ammunition or treasure. You may not enter the harbour with treasure. You may not visit Treasure Cove without treasure.