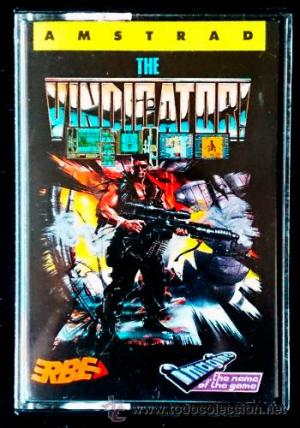 In The Vindicator! aliens invaded earth and laid it into ruins. The rest of humanity had to flee underground and one sole hero, the vindicator, goes out on his quest to kill the Dark Overlord. The game has three distinctive parts: the first is set in an underground complex where blueprints containing a way to destroy the aliens have to be found. To do so the vindicator has to navigate a maze, find keycards, kill aliens in the way and finally solve an anagram puzzle. After that stands a long way towards the alien base which plays out as a vertically scrolling shooter section. Here the player takes control over a plane or - after a life loss - a jeep with a regular weapon with unlimited ammo and a special weapon (bombs or grenades) for larger enemies. Inside the base the vindicator has to navigate side-scrolling platforms while using lifts and trap doors and shooting a lot of opposition.