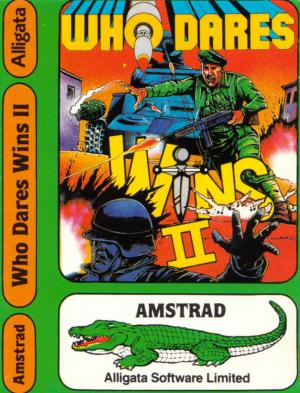 Eight invaded townships must be brought back under your control in this Commando-style shoot 'em up, which progresses vertically using a flick-screen system. You are armed with a rifle (activated by a short tap of the fire button) and five grenades (used via a longer press), and must not only kill off the enemy forces, but also rescue your comrades who have been tied to trees along the way. You begin at the bottom of the first screen and slowly make your way upwards; enemies pop up from all sides, walking around and shooting, and you have to dodge their shots while trying to shoot them yourself. The foes make good use of the decoy opportunities of the terrain, and you must do the same to have a chance. The levels include rivers with narrow bridges, potholes, and train-lines. Extra supplies are dropped in as you progress through the game, as are extra lives in addition to your starting 5