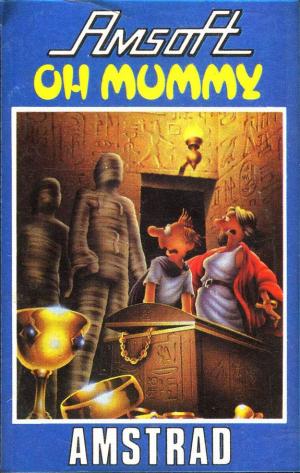 The object of the game is to unveil all of the treasure within each level (or pyramid) of the game whilst avoiding the mummies. Each level consists of a two-dimensional board. In contrast with Pac-Man as the player's character walks around footprints are left behind. By surrounding an area of the maze with footprints its content is revealed, which is either a scroll, a mummy, a key, a tomb or nothing at all. In order to complete a level it is necessary to unveil the key and a tombstone. The scroll enables the player to kill/eat one mummy on the level. If a mummy is unveiled it follows the player to the next level. The difficulty and speed of the game increases as the player progresses through the levels. The game is for one player only. Whilst, even at the time, it was considered simple in terms of gameplay, graphics and sound it was for many people one of the better and more addictive early offerings for the Amstrad. The music played during gameplay is based on a children's song known as The Streets of Cairo, or the Poor Little Country Maid.