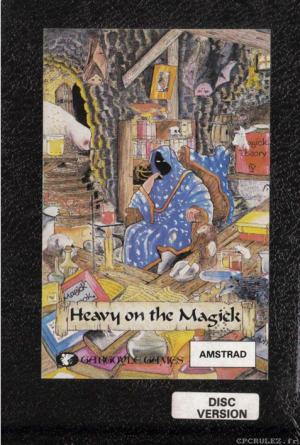 Heavy on the Magick

Axil the Able stood in three inches of stagnant water and surveyed one of the most dismal dungeons he had ever been thrown into... 30 seconds earlier, he was sitting in front of the ox-roast in that famed haunt of the Occult. The Golden Thurible engaged in his favourite pastime of Wizard-Baiting. What a good story Axil was telling - a new one about Therion, a certain Moon creature and a rather gullible Elf- really, the sudden silence ofhis audience should have warned him. The crowd parted as Therion strode across the floor, dangerous in all his 10 degrees. Therion raised a twig-like index ringer and flung Axil several hundred leagues across Graumerphy, into the dungeons beneath the dreary castle called Collodon's Pile.