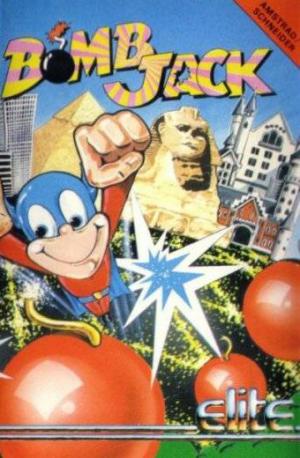 Bomb Jack is a hero who can perform high jumps and float in the air. His goal is to collect all red bombs on the screen. The game's antagonists are enemies such as birds and mummies which, once they drop in the bottom of the screen, can morph into things like flying saucers and orbs that float around the screen, making Jack lose a life if he touches them. Collecting bombs will increase the bonus meter at the top of the screen (collecting lit bombs increases it more). When the meter is completely filled up, a circular bouncing "P" appears, and when collected, it will turn all the enemies into bonus coins for a short period during which Jack may collect them. Other similar bonuses are the B (Bonus) which increases the score multiplier (up to 5x), the E (Extra) which gives an extra life, and the rare S (Special), which awards a free game. There are five different screens in the game, each featuring a distinct scheme of platforms (the fifth has no platforms at all). There is a special bonus for collecting 21 or more lit bombs in a row, out of the 24 bombs of each round.