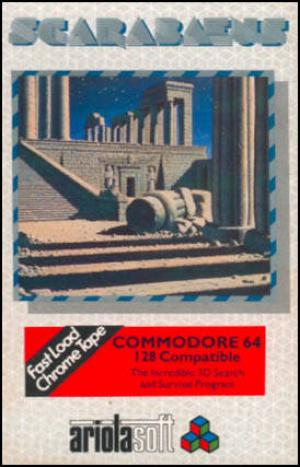 Scarabæus is a 3D adventure game made by Andromeda in 1985. It is also known as "Invaders of the Lost Tomb" in North America. The game starts with the player landing his spaceship near an Egyptian tomb. He wears a spacesuit and is followed by a dog. His aim is to collect the ancient treasure of Scarabæus, a smaragd in the shape of a dung beetle kept inside the tomb. Although it's not shown in the presentation, the explorer gets bitten by a spider upon entering the temple. The tomb contains several vials with an antidote, and several others with poison, and the explorer must solve some puzzles that will reveal which ones he can drink and which ones he must avoid. He also must survive hostile monsters that will try to kill him. The game is divided into three maze-like floors, each with its own goals. The ultimate target is to survive and recover the Scarabæus, held in the Pharaoh's Tomb. Along the way, the player needs to keep an eye on the explorer's health, shown on the instruments on the right of the screen.