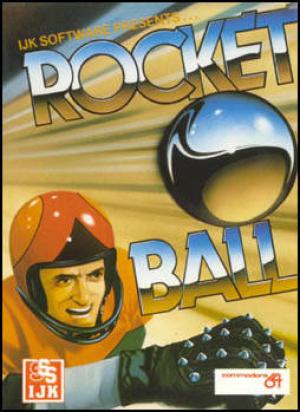 In the future (the year 2010 in the game) there are no longer wars in the world, disputes are settled with a game of Rocket Ball. Each team consists of five players on skates and a ball is shot into an arena from right to left and the idea is to pick the ball up and shoot it into an opening in the wall on the right. If the ball touches the left wall then the game is restarted and the ball fired into the arena again. Each match lasts 10 mins and the team with the most goals win. The ball can only be picked up and if touched knocks the player off his feet and the player with the ball can be tackled by the opposition players. Rocket Ball is viewed from the side at an elevated angle with part of the length of the arena shown and will scroll right to left with the position of the ball. One or two players can play and have the choice of four teams. If playing the computer you can select from one of six skill levels. Players can only go left and can't move to the right but can speed up or slow down. Moving the player is controlled by the joystick and while holding down the fire button and pressing down will pick the ball up, while pressing up will knock down a player.