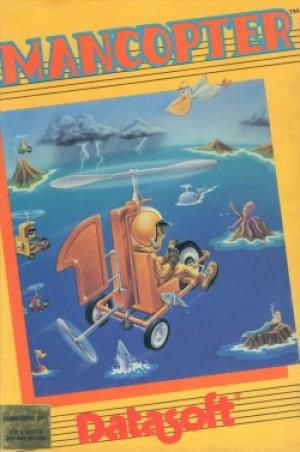 Mancopter is a side view horizontal game where the screen scrolls from right to left when you move, as you control your hero flying a primitive helicopter powered by pedal-power for a race over the ocean. You must fly and pass as many other competitors as you can as you try to get from the start-line to a finish-line a long distance away. To fly your helicopter you keep pressing the fire button to stay airborne and press left to move along the screen. If you stop pressing the fire button then you fall downwards towards the water, if you stop pressing left then your momentum keeps you going until you slowly come to a halt. The race is timed and you start with seventy seconds and this decreases as you race but passing buoys gives you forty extra seconds. The other competitors fill the skies and you can avoid them or hit the top of their helicopter which sends them into the water but if you are hit from above then you fall into the sea. You are carrying four fish and every time you hit the water then a whale appears and lifts you onto it's head but at the loss of a fish and if you have no more fish when you hit the water then a shark appears and eats you. Pelicans fly in the air from left to right and if they have a fish in their mouth then when hit gives you the fish and you can carry up to eight. Hit a pelican without a fish and it takes one of yours and if you hit one without carrying any then you hit the water and get eaten once again. Other creatures to avoid are squids, dodos, and storm clouds which release lightning and if you are hit by any then a fish is lost. If you run out of time then a fish is lost but you are given five seconds to try to reach a buoy. Trees make an appearance and you are unable to pass the leaves and branches so you must fly underneath while avoiding hitting the water. During the race, rafts make an appearance and when landed on give you bonus points for time remaining and competitors passed. Hitting a competitor into the water doesn't count as a pass.