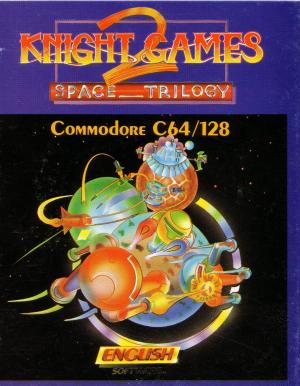 Knight Games 2: Space Trilogy is the sequel to Knight Games. Set in the year 3002, it consists of three different futuristic games: "Combat Robot", "In Orbit" and "Final Tournament". Combat Robot: Based on Dropzone, the player controls Robby the Robot in a two-way horizontal scrolling game. The goal is to pick up friendly robots while blasting enemies. Once a robot is picked up he can be taken back to base and dropped. In Orbit: Flying about Earth in another two-way horizontal scrolling game, the player has to blast enemy ships while trying to load supplies in orbit over the planet. The game then switches to a 3D view behind the player's ship as it heads for the loading bay. Final Tournament: Reminiscent of the first game, this part is a competition in three events of armed combat: Jet Joust, Light Sabres and Photon Chains. Each event is viewed from the side on a single screen. The goal is to defeat one's opponent and get a high score. This part can be played by one or two players.