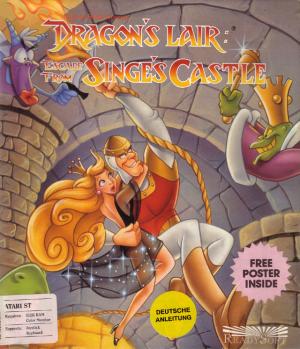 In this adaptation of the arcade classic, you continue where Dragon's Lair part one finished. Dirk, having rescued the fair princess Daphne, decides to go back through the Dragon's Lair and relieve Singe of some of the gold that is in the castle which is under the protection of the cunning and lethal Lizard King. You will need lightning reflexes and judgement to fight the Lizard King and avoid the giant rolling marbles. In this adventure you will be rushed down rapids in a barrel and sent down corridors on a magical flying horse and other dangerous deeds will present problems for you. Finally, direct Dirk to freedom through the realm of the mud monsters who come alive from the very earth itself to enslave Dirk and turn him into mud like themselves, navigate the dangerous terrain and jump across the chasm and freedom is yours.