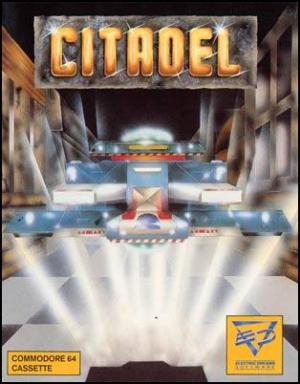 Citadel is a comparatively slow-paced shooter that emphasizes planning and careful movement over fast reflexes. On a planet that was thought to be uninhabited, an underground city complex has been discovered. The player's task is to explore this city with a remote-controlled hoverdrone, called Monitor, while trying to avoid its automatic defense systems. Monitor is controlled from a top-down perspective and can only be moved into four directions, holding down the fire-button enables it to shoot in eight directions. There are various stationary and moving enemies that activate when Monitor gets close enough and start shooting when it moves. Some can shoot in four, others in eight directions, while others only try to ram the monitor or attack with homing shots. Pressing the fire-button twice and then holding it activates a capture probe that can be used to pick up items, operate switches and control hostile drones. Drones under Monitor's control follow it around and can be used as a shield against projectiles, a battering ram against other drones or a plug to prevent more enemies from emerging from a trap. Captured movable drones automatically move into the direction Monitor is firing in, but can also be locked in a relative position by pressing the space bar. In order to be able to capture a drone, a certain amount of energy is needed, depending on the type of the drone. Items to replenish energy can be picked up as well as better weapons like rapid-fire or two- or three-way fire. There are eight cities to explore, each consisting of two floors connected via lift shafts. Usually, reaching the exit of a city involves going back and forth between both floors and deactivating various beam generators that block the path.