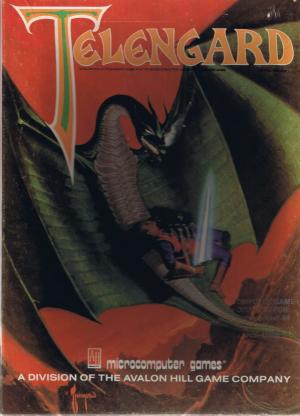 Telengard is an earlier example of a "dungeon crawler" role-playing game--albeit with a top-down view- with either real time movement (DOS version) or turn-based movement and turn based combat. Telengard is also played in real time, which means that monsters can attack even when the player's character is not moving. The player controls a single adventurer, selecting randomly-rolled sets of attributes: Strength, Intelligence, Wisdom, Constitution, Dexterity, and Charisma. The vast Telengard dungeon consists of 50 levels down and 200 by 200 rooms each level. Experience is awarded not only for defeating enemies, but also for finding treasure. When the player character gains a level, their attributes increase, and they gain the ability to cast higher-leveled spells. Treasure chests appear randomly in the dungeon. There are also specific features such as altars, thrones, fountains, etc. that the adventurer can discover which may have various effects on the character, whether being either positive or negative. Some creatures will befriend the player, sometimes providing the player with an item and/or healing them, provided the player's Charisma is high enough.