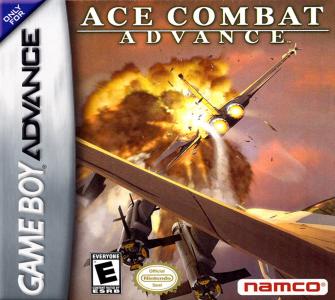 Ace Combat Advance is a video game in the Ace Combat series developed by Hungarian studio Humansoft. It is the first in the series for a handheld gaming system. Unlike other flight simulators, it's a top-down shooter similar to Strike (video game series), but using fighter jets. It has been criticized for awkward controls, lack of appeal, difficulty and very poor graphics. Unlike other Ace Combat games, a Japanese release for the title was absent. The Ace Combat series makes its debut on the Game Boy Advance with challenging missions, unlockable planes, and free-roaming environments. As the newest pilot in an elite fighter squadron, you must help destroy the Air Strike Force--the military arm of an evil multinational corporation. If you destroy enough enemy planes during your missions, you'll unlock new planes. Fly in air-to-air and air-to-ground missions over arctic, forest, and desert environments. Each environment features destructible buildings and objects.