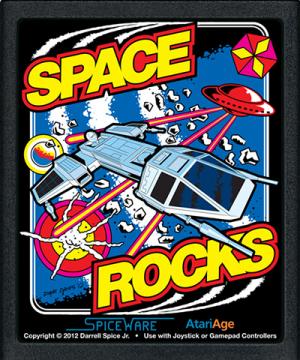 While on a routine Stellar Cartography mission, UESC Rains experienced a malfunction and warped into an asteroid field in an unknown sector of space. Unable to get a bearing to safely warp out, the ship must blast the asteroids into smithereens to prevent imminent destruction. To make matters worse, the local inhabitants are xenophobic and have sent warships and Magna-Mines to eliminate the alien (that's you!) threat. As the pilot of your ship you must maneuver instantly, rotating left, right and energizing your thrusters to avoid destruction. A direct hit on an asteroid with your laser cannon breaks it in two. A hit on one of these breaks it into two smaller asteroids, a final hit on a small asteroid destroys it completely. Your ship is equipped with a special defensive option to help you avoid collisions when the action gets intense! Space Rocks is an impressive blending of the classic arcade games Asteroids and Asteroids Deluxe, crafted for the Atari 2600 by Darrell Spice, Jr. If you're a fan of either arcade cabinet (or both!), you'll love Space Rocks! While Atari's version of Asteroids for the 2600 was passable at the time of its release, Space Rocks blasts far ahead of this early effort. Taking full advantage of the DPC+ mode in our Melody Board, Space Rocks pushes the Atari 2600 to its limits and offers a wide variety of gameplay options to keep you playing for years to come. The graphics, animations, and sound effects are well above what is typically experienced on the 2600.