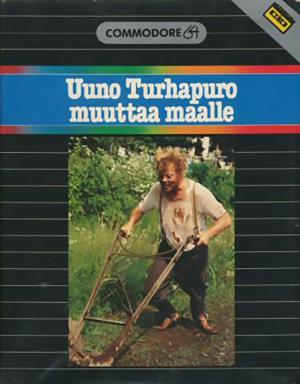 Uuno Turhapuro muuttaa maalle is a side-scrolling video game, available for the Commodore 64. It was developed by the Finnish programmer Pasi Hytönen in 1986 and published by Amersoft. The game is based on the popular Finnish comedy character Uuno Turhapuro (Numbskull Emptybrook), created by Spede Pasanen and played by the actor Vesa-Matti Loiri. The game was released in the same year as the movie with the same name. Uuno Turhapuro muuttaa maalle was the first Finnish game based on a movie license.