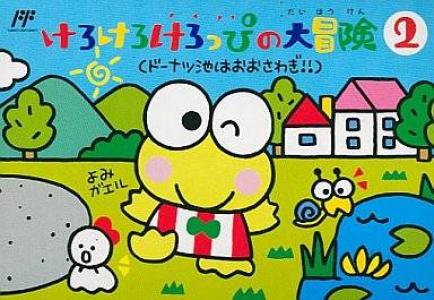 Kero Kero Keroppi no Daibouken 2: Donuts Ike ha Oosawagi (けろけろけろっぴの大冒険2 （ドーナツ池はおおさわぎ！！）?) is a Japan-exclusive action video game video game for children that was released on the Family Computer console in 1993. This video game has Sanrio's character searching for lost children who have been kidnapped by monsters. Essentially a standard Super Mario Bros. clone, the player controlling the cartoon frog has to leap around platforms jumping on baddies or killing them with his croak weapon. Each bonus level involves matching characters from the Sanrio franchise in a format similar to the card game Concentration. Intermission screens show the progress of the character throughout the game. Levels range from the forest to a seaside setting.