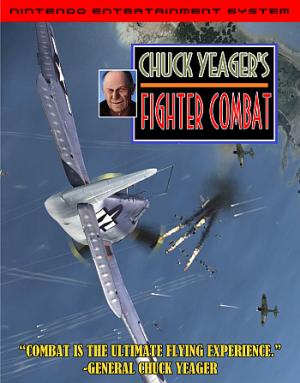 The greatest pilot in Air Force history needs a new wing man - Are you up for the challenge? Then step right up and into the cockpit in the newest smash hit game for the Nintendo Entertainment System; Chuck Yeager's Fighter Combat! Your mission is to climb on board one of the raddest air craft ever created, the F16C Fighting Falcon, and prepare yourself for some of the hottest action around. Are you man enough to handle the Gatling funs and sidewinder missiles? Can you take the heat of the brigadier general as he critiques your every move? Are you bad enough to travel the world fighting for US freedom against gnarly Soviets? Well then you came to the right place! State of the art 8-Bit technology put YOU in the cockpit of this action packed flight sim. It's alright if you're too afraid to go alone, the two player mode will allow you to have a co-pilot man your weapons alongside of you!