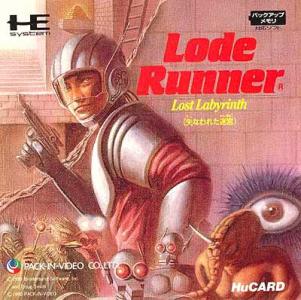 This TurboGrafx-16 release of Lode Runner allows users to create and save levels, much like the original computer-based releases. Lode Runner: Lost Labyrinth (a.k.a. Lode Runner: Ushina Wareta Meikyuu) is a platforming/puzzle game developed by Pack-In-Video and published by Brøderbund Software for the TurboGrafx-16. Though considered a very basic game when compared to other TurboGrafx-16 releases, Lode Runner: Lost Labyrinth contains the same feature set as the original computer versions of the game, including the ability to create and save user-created levels. Like other console releases, the action takes place on a scrolling screen, rather than a fixed single screen. The graphics have also been created specifically for this version, making the enemies look more deliberately like robots and the player character appears to be some sort of suited-up super human. A password system exists alongside a proper backup option for saving single-player progress.