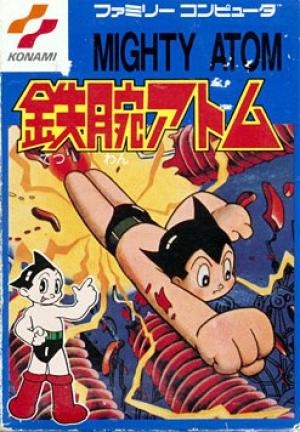 Tetsuwan Atom (鉄腕アトム?) is an action game developed by Home Data and published by Konami for the Famicom in Japan early on in 1988. The game stars Tetsuwan Atom, a popular early anime character who is better known as Astro Boy outside of Japan. Tetsuwan Atom was originally created in 1951 by Osamu Tezuka. The successful series started as a comic strip and was turned into a black and white animated series in 1963. It was one of the first (if not the first) animated TV series produced in Japan, and has influenced countless Japanese animated series that followed. The little robot-boy is one of Japan's most recognizable character. The story takes place in the future, at a time where humans and robots live together in harmony. The powerful robot-boy Atom lives with Professor Ochanomizu, an old scientist who takes good care of the little robot, and helps him fight crime and injustice. One day, burglars break into Professor Ochanomizu's lab and steal all of his money. It is now Atom's duty to recover the stolen loot.