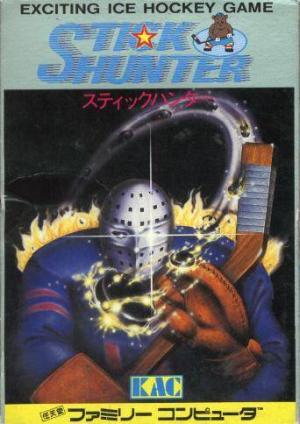 Stick Hunter: Exciting Ice Hockey is a game for the Famicom released only in Japan in 1987. It was never released in North America. Stick Hunter was the first actual ice hockey game created for a Nintendo gaming system. The game was designed so that 1 player could play against the computer, or 2 players could play simultaneously against each other. The length of the periods and difficulty level could both be adjusted. Playing as a character who has possession of the puck, the character could not only skate faster, but could only shoot the puck forward. So if the player wanted to pass to a teammate, the character on screen would have to be facing the person to which he's passing. The same applied to shooting at the net and attempting to score a goal. The character would have to be facing the opposing net. A player without the puck could only skate faster. If the goalie had control of the puck, he could only pass to a teammate. As in the real-world sport of hockey, the object is to score more goals than the opposing team.