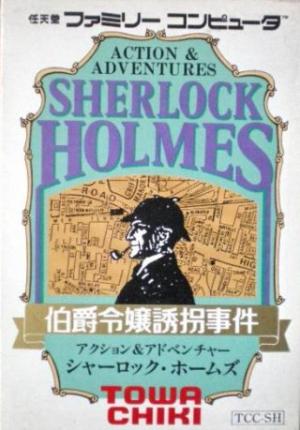 Sherlock Holmes: Hakushaku Reijou Yuukai Jiken (loosely translated as Sherlock Homes: Kidnapping of the Young Countess) is an adventure game developed for the Famicom by Towachiki, and released in 1986. The game puts the player in the role of Sherlock Holmes, who must travel throughout England (by train) while trying to solve the mystery of a kidnapping. In this unusual portrayal of Holmes, his only means of interrogating anyone to obtain information is by attacking them with jump kicks until they run out of stamina and reveal clues. The game alternates between a zoomed out view of England streets, where every bystander can damage Holmes simply by running in to him, to a zoomed in side scrolling view of buildings or sewers or parks. Besides interrogating people for information, or simply beating them up for train fare, Holmes must search seemingly random cracks or trees in order to find important clues, or inventory items.