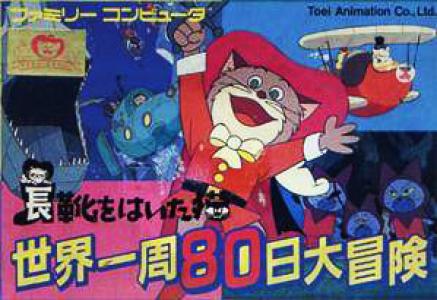 Nagagutsu o Haita Neko: Sekai Isshū 80 Nichi Dai Bōken (長靴をはいた猫 世界一周80日大冒険?, lit. "Puss in Boots: An Adventure Around the World in 80 Days")[3] is a 1986 video game based on the third film of The Wonderful World of Puss 'n Boots that was released exclusively in Japan for the Family Computer. Four years later, the game (with several modifications) was released in North America under the title Puss 'n Boots: Pero's Great Adventure. The main character is the Puss in Boots character from the tale; a cat named Pero (Toei Animation's mascot) He is also known as 'Perrault' in the game, as that was the name of the original author of the Puss In Boots story; Charles Perrault. He is known for helping an impoverished master attain wealth through the use of trickery.