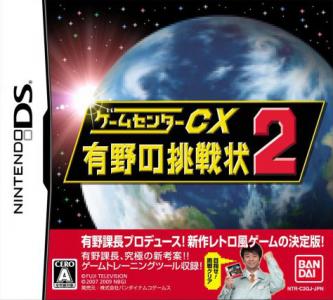 Game Center CX: Arino no Chousenjou 2 is the sequel to Retro Game Challenge which are both based off the Japanese television show of the same name hosted by comedian Shinya Arino. In the game a demon version of Arino transports the player to the 1980s as a kid where he or she must test their gaming skills by completing a series of challenges in various fictional video games. Unlike the first Game Center CX, which only featured NES styled games, the sequel contains titles based off several systems including the SNES, Game Boy, Game Boy Color, Game & Watch and the MSX. Some of the games are sequels or remakes of games from Retro Game Challenge while many are completely new titles.