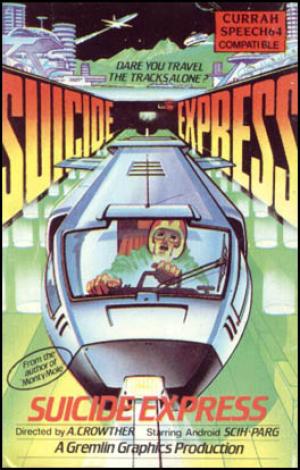 "You are an android called Scih-Berg and you have been sent by your masters to the planet Nilmerg to clear all alien life-form who are against your planets inhabitants from living there. You have to drive a nuclear train along the planets monorail network over various levels blasting all life-form until you reach 100,000 points and you are able to leave the planet. The aliens will send various vehicles out to destroy you like planes and other trains. If you hit a vehicle or bullets and missiles then you lose one of three lives. You have a limited amount of ammo but you can pick up extra along the way but if you have 50 or more then it's a loss of life. The game screen is split into two halves with a scrolling horizontal shooter viewed from the side on the top half and a top down view of the map which indicates extra ammo and advancing aliens on the bottom half. The game is controlled with a joystick or keyboard and you can control the speed of your train as it moves from left to right on the top half of the screen with the fire button firing missiles upwards and forwards. On the bottom half you can change tracks by moving up or down. You start the game on level one but you can choose the first nine, but the game doesn't stop to start each level, it just moves seamlessly to the next one. After every 10,000 points you receive an extra life and also on the screen you can see your score, lives, level and ammo" --mobygames.com