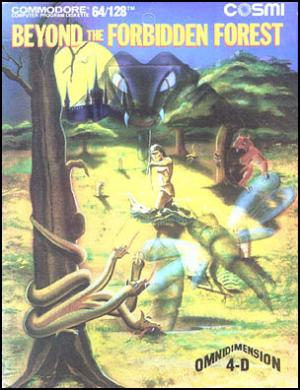 Beyond the Forbidden Forest

Beyond The Forbidden Forest is a free form adventure program designed in OmniDimension 4D, which not only depicts the passage of time, but also allows the character to appear to move in and out of the screen as well as in front of and behind objects. The goal of the archer is to destroy the Demogorgon who lurks in the cave beneath the castle (Part II). In order to accomplish this task, the player must first battle his way through the Forbidden Forest, eliminating the monsters sent by the Demogorgon to terminate his quest, while accumulating sufficient golden arrows to prevail in the Underworld. Remember, since Beyond The Forbidden Forest is designed in OmniDimension 4D. you may be required to not only fire your arrows at different elevations, but also in different directions including into and out of the monitor screen. Be careful not to shoot yourself!