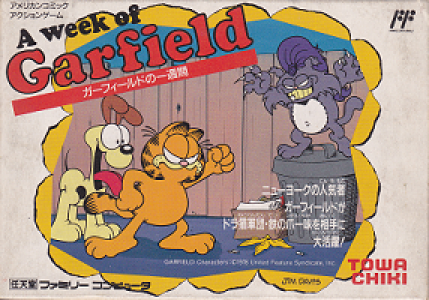 Garfield no Isshukan: A Week of Garfield

A Week of Garfield (ガーフィールドの一週間 Gāfirudo no Isshukan?) is a 1989 Family Computer title based on the comic character Garfield. It was only released in Japan due to issues with using the Garfield license in North America and Europe. It is the third video game to be based on Jim Davis' Garfield Comics The game is a sidescrolling action game in which enemies can be mice, spiders, birds and other assorted animals. Garfield's default attack is a low judo-style kick when he is standing on his hind feet. There are also several powerups that are limited to how many Garfield has the ability to pick up. A time limit prevents players from wandering aimlessly throughout the level looking for power-ups.