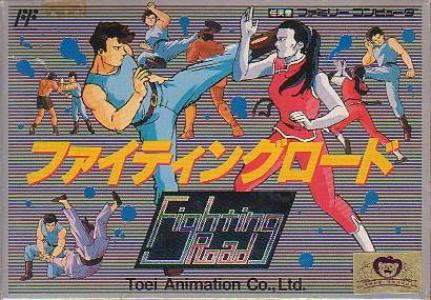 Fighting Road is a one-on-one fighting game developed and published for the Famicom by Toei Animation near the end of 1988. The player must follow a path around a river fighting increasingly stronger opponents at every stop. Each button performs an attack and pressing Up makes the character jump. There is even the standard leg sweep move that trips the opponent. The game does have blocking, which is executed by holding back as an opponent's attack is coming in. The game is single player only, and lacks multiplayer modes. There is a lot of story text and dialog in between matches. The game was planned to be released in the US, but it was canceled, leaving Fighting Road as a Japan exclusive.