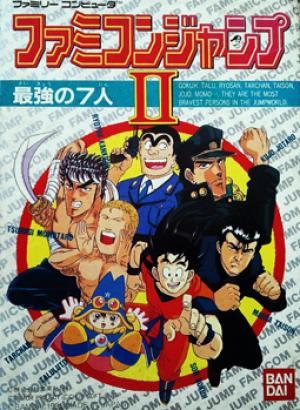 Famicom Jump II: Saikyō no Shichinin (ファミコンジャンプII 最強の7人 Famikon Janpu Tsū Saikyō no Shichinin?, lit. "Famicom Jump II: Strongest Seven") is a 1991 RPG for the Nintendo Family Computer published by Bandai. The sequel to Famicom Jump: Hero Retsuden, the game features seven main characters (as the subtitle indicates) from different Weekly Shōnen Jump manga serialized at the time. Only four of the 16 represented titles from the original are brought back, while the remaining three are new to the sequel. There would not be another crossover game until the release of Jump Super Stars and Jump Ultimate Stars. (of which six of these series would be represented, the only one not being Magical Tarurūto-kun.)