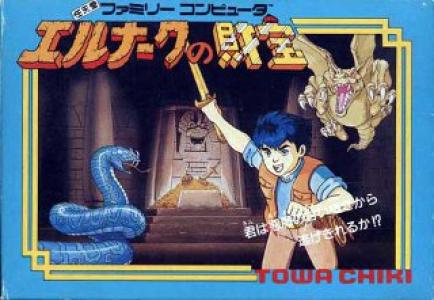 Elnark no Zaihou (エルナークの財宝? lit. Riches of Elnark) is an adventure game developed and published by Towachiki. It presents the action from an overhead perspective, similar to many of the traditional 2D Zelda games. It is unusual in that it tracks the player's behavior and adjusts a meter which indicates whether the player is generally more good (Light) or more evil (Dark). Though a more evil player has stronger abilities, players must air on the side of good in order to make significant advances through the game. As a result, this game is considered extremely difficult, due to the unknown nature of how one should behave in order to proceed. If the player does not perform the correct actions, levels typically repeat themselves, and players find themselves stuck in the game with no clear method to advance. In fact, it was one believed that the only way to beat the game was to exploit a bug, however that has since been proven false.