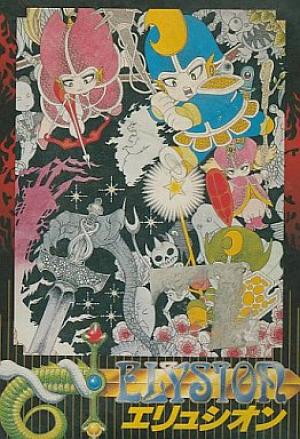 Elysion, though a fairly traditional 8-bit JRPG in many respects (the first thing the player does is talk to the local King for exposition, for example), draws its influences from a lot of very different games within the RPG family: It superficially resembles the first Dragon Quest, it allows the player to select between multiple protagonists when starting the game as is the case in Final Fantasy, the combat system is real-time combat without screen transitions such as something like Hydlide or Ys and the enemies have an odd habit of only moving when the player does, such is the case in many strategic Roguelike dungeon crawlers like the Mystery Dungeon series. The goal of the game is to defeat the evil demon Baal. However, the King first tests the player character by having them enter the dungeon beneath the castle and find a group of important quest objects. After completing this large dungeon, the protagonist officially becomes the Hero of God and can go defeat Baal by exploring the rest of the continent for some necessary magical scrolls and, eventually, special God-like equipment. "Elysion" refers to the Elysian Fields, an ancient Roman underworld for honorable souls that died in battle.