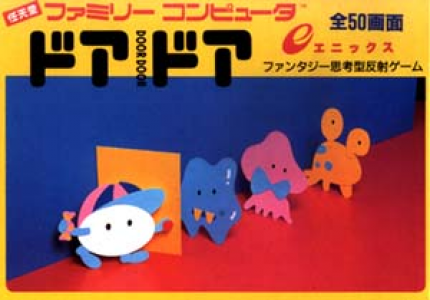 Door Door's blend of puzzle and platform game elements requires strategy, anticipation, and dexterity. Players control Chun, a small, spherical animal outfitted with a baseball cap. Chun is relentlessly pursued by a quartet of game AI aliens traveling in unique deterministic algorithm paths. The most predictable aliens Namegon and Amechan follow Chun in the most direct path possible, Invekun deviates and follows roundabout paths using ladders, and Otapyon shadows Chun's jumps. The player's objective is to trap the aliens behind sliding doors positioned throughout each level, courses composed of platforms conjoined by assorted ladders. To trap the aliens, players approach the door from the side its handle is on, open it by running across it, lure the advancing villains inside, and shut the door before they escape. Trapped doors cannot be opened again. Chun can jump to avoid the aliens, whose touch spells death. Bombs and nails, which sometimes appear on the screen, are also lethal. When the player dies (provided he has continues) he restarts the level with previously trapped aliens vanished, and all doors are accessible again.