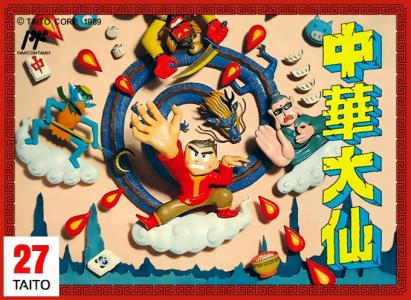 Chuuka Taisen is a Japanese horizontal scrolling shooter released in 1989. The player controls Mike Chen floating on a cloud, maneuvering around the screen and shooting balls of energy at flying enemies. Powerups can be collected for stronger and faster firepower. Some parts of the game stage have doors that give the player the opportunity to buy special bomb types with collectible credits. Each stage has its own mini-boss and big boss. Throughout the stages, the player restarts at certain checkpoints after losing a life.