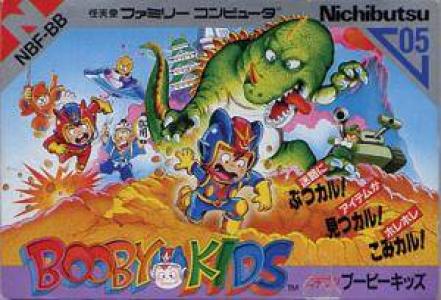 During the prehistoric era of humanity, cavemen and dinosaurs compete for ultimate supremacy. A young boy has to collect important treasure without being killed by the rampaging dinosaurs. All he can do is attempt to temporarily paralyze them with a specialized dinosaur trap. All treasures must be collected before admittance to the next level is possible. One hit from either a dinosaur, caveman, or other type of enemy instantly kills the player. Levels range from the conventional cavemen setting of the earlier levels to feudal Japan and even some futuristic levels inspired by science fiction.[4] There are 21 levels in this game with five different bonus levels to gain extra points in. Objects to acquire in the other time zones include radios (retrieved in the World War II stages from Japanese soldiers), bags of money (retrieved in the modern levels while dodging criminals and police officers), computer monitors (earned while dodging robots) and ancient Japanese scrolls (found while avoiding samurai).[