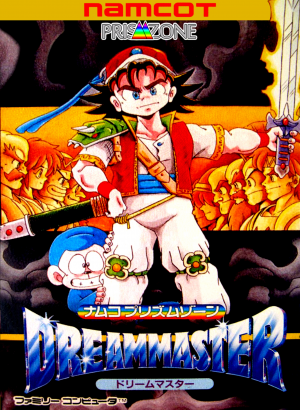 The Kingdom Of Oltaria is a peaceful one, thanks to the power of its Lord King Akinas. The king's daughter, Princess FAQS, is about to turn 16, but one day an evil old man known as the Black Master turns up determined to have FAQS for himself, and he drags her into the world of nightmares: the Black Dream. The Princes is trapped in a deep sleep, and the king summons adventurers from all over the kingdom to kill the villain and rescue the Princess. They enter the Black Dream but never return, at least, never wake up. One day, Sir Kleith, the Captain of the Royal Guard, decides to go to search for the Dream Sage in a forest to the south of Oltaria. Eventually, after a difficult journey, Kleith arrives at his destination, where the Dream Sage is training a young disciple called GAME to be a Dream Master. (A Dream Master's role is to bring peace and tranquillity to dreams and their powers must be used to heal and not to corrupt souls.) Anyway, poor old Kleith dies after delivering his message about the plight of the Princess. The Dream Sage says he's too old to undertake the task of saving the Princess but GAME can do it! This is when the action begins, as GAME falls asleep and the Black Master appears, to transport him into the first Black Dream where his skills are put to the test!