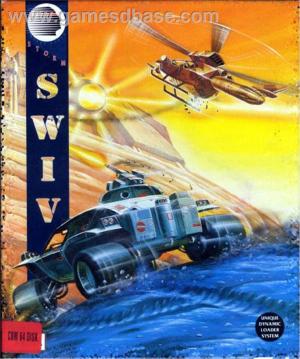 SWIV is a 2D vertically scrolling Shoot 'em up game originally released in 1991 for the Commodore Amiga, Atari ST, Commodore 64, ZX Spectrum and Amstrad CPC home computer formats. It was converted to the Game Boy Color in 2001. The game was considered a spiritual successor to Tecmo arcade game Silkworm, which The Sales Curve had previously converted to home computer formats in 1989. The Game's heritage is evident from the game design whereby one player pilots a helicopter, and the other an armoured Jeep though SWIV is not an official sequel, as noted by ex-Sales Curve producer Dan Marchant: "SWIV wasn't really a sequel to Silkworm, but it was certainly inspired by it and several other shoot-'em-ups that we had played and loved."[1] In the game's own manual (for the Amiga, at least), however, it was explained that "SWIV" was both an acronym for "Special Weapons Intercept Vehicles" and also short for "Silkworm IV" (even though there was not a Silkworm II or III). Fans commonly refer to it as "Silkworm In Vertical".