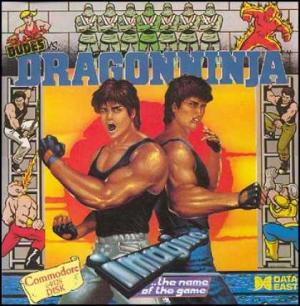 Bad Dudes Vs DragonNinja, also called Bad Dudes Vs. Dragon Ninja, often referred to simply as Bad Dudes, and known in Japan simply as DragonNinja (ドラゴンニンジャ?),[5] is a 1988 arcade game developed and published by Data East. It was also ported to many computer and game console home systems. The game was followed by a 1991 spiritual successor Two Crude Dudes (known in Japan as Crude Buster). After Data East became defunct due to their bankruptcy in 2003, G-Mode bought the intellectual rights to the arcade game as well as most other Data East games and licensed them globally.[6] The game is a side-scrolling beat 'em up where the players are set in the role of the titular duo tasked with rescuing "President Ronnie" from ninja kidnappers. It was met with commercial success, and a generally positive to mixed critical reception. It has since become widely known for its general premise and introduction cut scene.