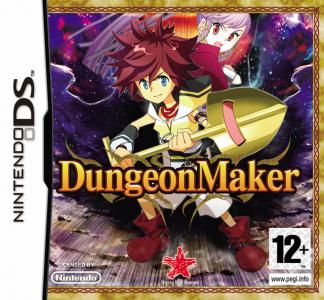 Also know as: Master of the Monster Lair

Master of the Monster Lair (known as Dungeon Maker: Mahou no Shovel to Chiisana Yusha in Japan and simply Dungeon Maker in Europe) is a Nintendo DS video game by Atlus and Global A. It's a unique dungeon crawler that requires the player to actually construct the dungeons in order to lure the monsters who are crashing the cities. Once inside, the endless stream of monsters can be defeated and the items that are retrieved from them can be sold. This was another tactic that the government of the city proposed - it would greatly increase their economy, which is also evident by the lack of supplies early on in the shops due to everyone buying weapons and armor to thwart the common enemy.