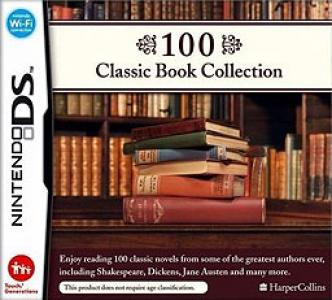 100 Classic Book Collection, known in North America as 100 Classic Books, is a computer program published by Nintendo and developed by Genius Sonority, which was released exclusively for the Nintendo DS. First released in Europe on December 26, 2008,[1] it was later released in Australia on January 22, 2009[2] and in North America on June 14, 2010. The program includes one hundred public domain works of literature. Genius Sonority had previously released a similar collection of books in Japan under the title DS Bungaku Zenshuu (ＤＳ文学全集?) on October 17, 2007.[4][5] A smaller version of the collection consisting of 20 books under the title Chotto DS Bungaku Zenshu: Sekai no Bungaku 20 (ちょっとDS文学全集 世界の文学20?) was released in Japan as a downloadable DSiWare application on February 25, 2009.[6][7]