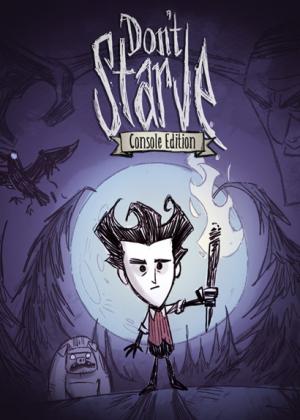 Don't Starve is a 2013 action-adventure video game with survival and roguelike elements, developed and published by the Canadian indie company Klei Entertainment. The game was initially released via Valve's Steam software for Microsoft Windows, OS X, and Linux on April 23, 2013. A PlayStation 4 port became available the following year (with PlayStation Vita and PlayStation 3 versions released on September 2014 and June 2015 respectively), and further versions for Xbox One, iOS and mobile phones are under consideration. Downloadable content titled Reign of Giants was released on April 30, 2014, and a multiplayer expansion called Don't Starve Together became free for existing users on June 3, 2015. The game follows a scientist named Wilson who finds himself in a dark, dreary world and must survive as long as possible. Toward this end, the player must keep Wilson healthy, fed, and mentally stable as he avoids a variety of surreal and supernatural enemies that will try to kill and devour him. The game's "Adventure" mode adds depth to the sparse plot and pits Wilson against the game's antagonist, Maxwell. Don't Starve was Klei's first foray into the survival genre. Conceived during the height of a game industry trend of dropping players into a world with few instructions and a goal of survival, the game was influenced by Minecraft, which spearheaded this trend, as well as by filmmaker Tim Burton. The game received positive reviews from critics; commended for its original art style, music, and variety of ways for the player to die, although its high level of difficulty and implementation of permanent death were less warmly received. Don't Starve is an action-adventure game with a randomly generated open world and elements of survival and roguelike gameplay. Combat is handled by pointing and clicking with the mouse, while other activities are controlled by the keyboard, or using the inbuilt gamepad support to play using a controller, giving it a console-like gameplay feel. The goal is to survive as long as possible, with a count of the number of days the player has survived shown onscreen. The game keeps few records of player progress besides the total number of experience points and the playable characters unlocked. Wilson is the main playable character, but the first character, Willow, can be unlocked with 160 experience points - the player earns 20 each in-game day and receives them after dying - while Woodie, the last, requires the game's limit of 1,600. As is common among roguelikes, death is permanent, barring the use of several rare and difficult to acquire items, like the Meat Effigy, Touch Stone, and Life Giving Amulet. The game relies on a day/night cycle that causes meaningful fluctuations in gameplay style. During the day, the player spends most of their time exploring the world; gathering food, firewood, and other items; discovering "recipes" to combine available items; and avoiding enemies. With nightfall comes dangerous monsters as well as an invisible menace (Charlie) which attacks the player when the screen is dark. A player must either have a nearby light source or must have some sort of night vision to prevent the night monster from attacking. Crafting, which uses recipes, allows the player to create shelters and weapons like axes. The characters are able to gather and farm plants as well as hunt animals for sustenance, with several characters having dietary perks or restrictions. Food can spoil, however, so the player cannot keep it for too long. Eating spoiled food results in loss of health, sanity, and an increase in hunger. Each in-game day takes 8 minutes of real time. Wolfgang, an unlockable character, runs from a cadre of giant spiders and their young at dusk. Death can occur in a variety of ways. The player has three gauges displayed on the game's heads-up display, which respectively track hunger, health, and sanity. Hunger worsens by default, being replenished with food. Sanity decreases during the dusk and night, or as a result of certain unpleasant actions, such as robbing graves or being in complete darkness; it can be replenished through mentally stimulating activities, such as sleeping, picking flowers, and wearing "dapper" clothing. When hunger gets too low, it begins to chip away at health, which will eventually result in the player's death. A large variety of creatures can attack the player, including giant one-eyed birds, tree monsters, tentacles whose owners are not shown, and even small, weak frogs that will nonetheless try to accost the player and steal from them. Additionally, at low enough sanity, figments of the character's imagination become corporeal and able to attack the player. Some creatures, such as pig-like creatures often found in tribes, begin as neutral to the player (Excluding the Reign of Giants character Webber), but the player's actions may lead them to be allies or hostile foes. The game's bulk occurs in Sandbox Mode, but there is a second mode, Adventure, which the player can access by finding a landmark called "Maxwell's Door." Adventure serves as the game's campaign, and consists of five levels that pit the player against Maxwell, the antagonist of Don't Starve. The player loses all items and recipes upon entering, and can only pick four to keep upon completion of each chapter. Death or completion of all five chapters results in being returned intact to Sandbox Mode.