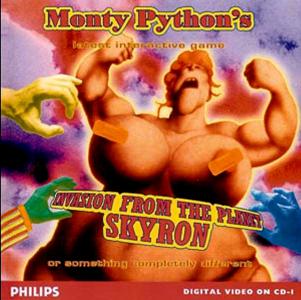 Invasion from planet Skyron is an interactive varietyshow, based on the works of the Monty Python team. It looks and feels like a game, but will be experienced as something completely different. Each time the program is started, viewers will see scenes in a different order and sometimes even completely new ones. By clicking the player/viewer directs the clan through the different worlds, based on the animations of Terry Gilliam. Clicking on objects or bringing the clan to certain locations trigger several kinds of events. Many encounters take place and each one requires a different reaction. But life in this Python world changes over time as well. As many as 13 different games are hidden in this world of Python, mostly based on specific sketches that still influence our perception of humour and the use of language. Players can earn points, which enables them to view sketches and clips in the cinema. This can be entered by clicking on the score sheep. But also during the exploration of the different scenes videoclips from the television series can be seen and every now and then the program is being interrupted for an intermission, among which a number of commercial ones. If players decide to leave the game they are enabled to visit the scenes they have gone through again. This way players can experience favourite scenes once more.