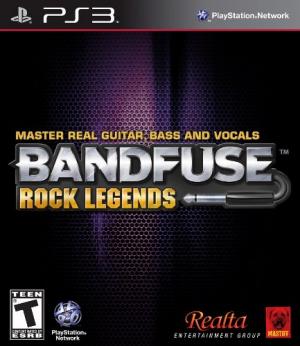 The game is designed to be a “Pick up and Play” experience for all levels. Complete novices, experienced musicians and everyone in between can enjoy the game. In addition to the proprietary audio engine, BandFuse: Rock Legends also integrates an animated version of Guitar and Bass tablature, a universal form of musical notation, that is extended to add timing information and interactive feedback. The game also features a scored vocal highway design licensed by strategic partner Harmonix Music Systems, as well as a Karaoke Mode for more casual play. The game was released on the PlayStation 3 and Xbox 360 platforms on November 19, 2013 in North America, and on November 26 in Latin America. It was released in Japan on PlayStation 3 and Xbox 360 on December 19, 2013. A European launch date has yet to be announced. BandFuse includes a multiplayer mode for up to four players. The BandFuse: Band pack hardware expansion bundle is compatible with the BandFuse: Rock Legends Artist Pack and allows three additional players to connect and play. The Band Pack includes a special (AcoustiLink) adapter that allows acoustic guitars to be used for game play. In North America, the Band Pack includes a vocal microphone, two additional SpeedFuse instrument cables, an AcoustiLink acoustic guitar adapter and a four-port USB hub.