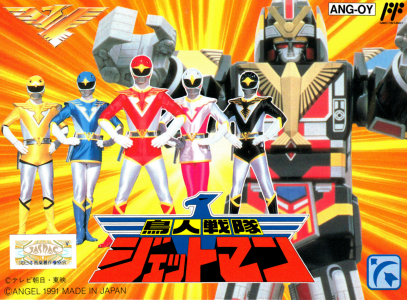 A Japanese exclusive. It is a single-player side-scrolling action game where the player assumes role one of the Jetmen members as they fight against the forces of Vyram. In the year 199X, Earth Defense Sky Force orbits the planet. They survey the Earth 24 hours a day to maintain world peace. When problems arise they send in agents to help out. SF-W6 and SF-W3 are two such agents. Upon completing a mission they are promoted to J-project status. Aboard the ship, The Chief explains that when hit with Birdronic waves, they will turn into Choujin Sentai. Immediately after Tendou Ryu's conversion into a Jetman, the enemy Vyram attack. Radiguet, the leader of the Vyram, announces that they have conquered other detentions and now plan to conquer the 3rd dimension. During this attack, Ryu loses his girlfriend Rie through a hole in the ship. The Birdronic wave machine shatters and the remaining 4 waves are sent down to Earth at random. After the attack Ryu and The Chief search the Earth to find the remaining members of the group.