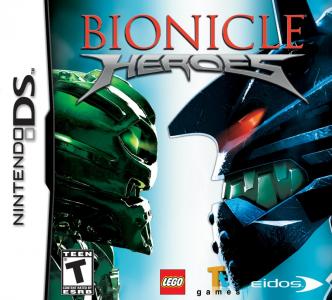 Bionicle Heroes is a 3D third person shooter video game. The game was released in November 2006 by TT Games on PlayStation 2, Xbox 360, Nintendo GameCube, Microsoft Windows and by Amaze Entertainment on Game Boy Advance, and Nintendo DS, a Nintendo Wii version was later released in April 2007. The game stars Bionicle's 2006 feature characters, the Toa Inika and the Piraka. However, the game also features enemies from previous games. Players must destroy enemies, solve puzzles in order to progress further, and throughout the game, maximize their individual special powers and gain better and deadlier weapons. While the game is loosely based on the first part of the Bionicle Legends story arc; it is non-canonical and features several characters from previous arcs in the franchise. The Nintendo DS version of Bionicle Heroes is in the first-person perspective instead of third-person, and is the first LEGO game to be rated T for Teen. The Game Boy Advance version is also vastly different, having a top-down perspective instead of over the character's shoulder.