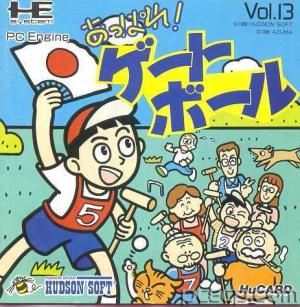 OK. So croquet may not be a popular idea for a video game, but the Japanese being as Japanese as they are, they went and did it anyway. So what does Appare! Gate Ball have to offer? First up is the choice between action and simulation mode. The main difference that I can make out between the two is that in action mode you have to both aim the shot and set the power, in simulation only the shot aiming is required. Your game is played out in two teams, rather than two individuals, and the members of your team are chosen from a variety of weird and crazy looking characters with varying attributes. Shots are aimed in a simple overhead viewpoint, which then switches to a standard view for the execution of the shot itself. All this is accompanied by a jolly little tune that plays away in the background.