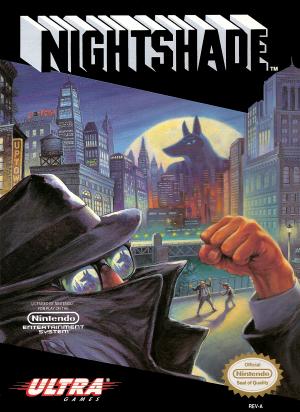 The shadows of doom grow long as the ancient Egyptian villain Sutekh envelops Metro City with a wave of crime. But Sutekh's seedy underworld is about to be infiltrated by a superhero unlike any the world has ever seen. A superhero who can melt into the darkness like a phantom. By day this brave new crimefighter is a common ordinary citizen. But when night falls, he is cloaked in a secret identity to seek out and destroy the dark forces that lurk on midnight streets. Who is this man the press calls Nightshade? Only you can answer that... for he is you! Every night you solidify your superhero status, patrolling 100 of the city's darkest corners. Here you'll find thieves, muggers, and other alley scum that you must either deal with or destroy for clues. But be warned. You're not the only night stalker. For as you hunt Sutekh, Sutekh hunts you with the human printing press, the closing wall of spikes, deadly jackal pits, and the chilling freeze ray. Of course the ultimate key to destroying Sutekh is your popularity. For it's a power source that gives you the wit to decipher clues and the strength to pulverize villains and rescue innocent bystanders. Remember, if this heroic prowess ever diminishes, you'll no longer control the night. You'll be consumed by it.