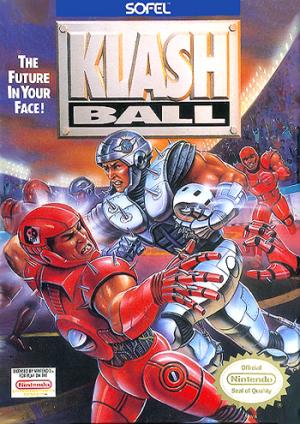 Sofel takes life simulation into the future with Klashball, for the NES. In a stadium hundreds of years from now, techno-gladiators do battle, combining contact with speed and finesse. Two five-man teams go for it, each fighting to deliver a three-kilo metallic energy sphere into the opponents goal zone. Teams challenge each other in a surreal arena that utilizes devices such as a warp tunnel, ball launcher, and magnetically charged bounce domes. Klashball features a complete league system. There are 11 rowdy teams, each with unique skills, strengths, and weaknesses. After each match the central computer analyzes the outcome and records the stats. Play against the computer or klash it out with a friend. If you're ready, take a trip into the 23rd century with Klashball. A game so real, it's in your face!