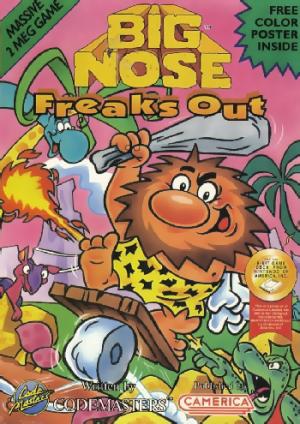 Big Nose Freaks Out is a platform game for the NES, produced by Codemasters and published by Camerica. The player controls a cave man character who has had all his bones stolen from a prehistoric bank by a dinosaur. Bignose sets off on an adventure through numerous prehistoric settings. Bignose defeats enemies using a club, however he also has access to a primitive skate board device (stone-boarding), via his invention - the wheel. The game is essentially a platform game in which the player collects bones and other items, while travelling from left to right until reaching the goal. B.N.F.O also had a two player mode and the addition of numerous secret levels and bonuses. Big Nose Freaks Out has become popular as more people have access to the ROM file through emulation websites.